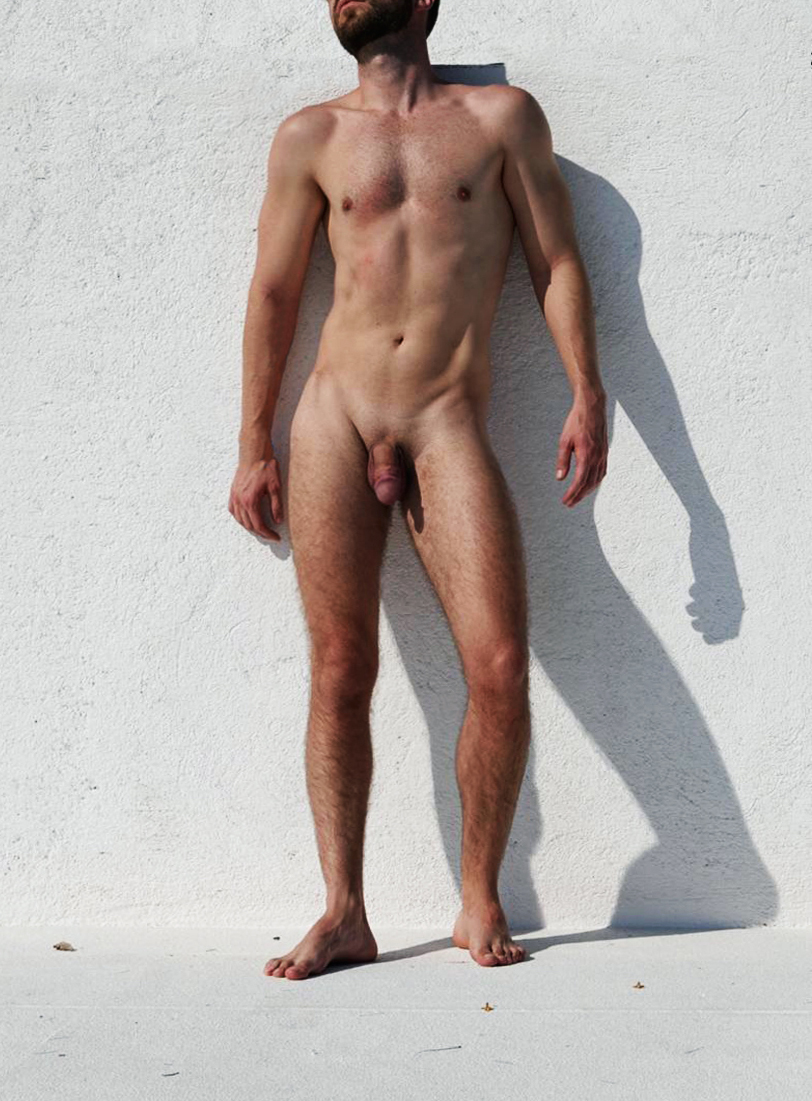 I went to my favorite nudist beach by myself to spend the first days of 2019. Even though I’m partnered, I like to travel alone at least once a year to reconnect with myself. 2020 is the first year I don’t do that, and I miss it a lot.

One morning, I agreed to have a photoshoot session with an amateur photographer on the beach, early, and in a deserted area… even though this time I didn’t want the shoot to be sexual, and there were a few curious observers, the combination of the place, the vibe, and the actual situation, turned me on and I ended up jerking off in front of the camera (and the observers). I’m surprisingly (even to myself) comfortable with public sexual demonstrations (especially if they are anonymous) and masturbating in front of the camera is something I had already done before and enjoy a lot.

After that I went back to my hotel, took a shower, and decided to go back to the beach. This time to a busier spot where you can rent a big umbrella and a sunbed for like €2 all day. It was quite empty at the time…

I was planning to just reflect on my recent experience, smoke some weed, swim a bit, read a book, and just sleep under the shade… as I’m laying down, I notice that the next umbrella on my left was being taken by a beautiful Latin boy. Young – early twenties, brown tanned skin, beautiful muscular – but not too muscular – lean body, bubble butt, toned curvy legs and a beautiful dick. We’ll call him Diego.

We exchanged a couple looks, we checked each other out (remember it’s a nudist beach and we are both naked), smiled at each other… but neither of us made a move right away. As if we both knew that it would happen eventually…

So, I read a bit, smoked a bit, and took a nap… I must have slept for like an hour or so… and when I woke up, I saw Diego swimming with another man in the ocean.

I wanted to see up close who this man was… and I had to pee anyway… so I went into the ocean. While I was peeing, I could check out that this other guy was very, very hot: older – in his forties, hairy – All. White. Hair.-, muscular and lean, very handsome… he was one of the few clothed people and he was wearing a sexy speedo. We’ll call him Mike.

I wasn’t far from them… and while I was watching them being playful and sexy to each other, I got hard, and with the movement of the waves I’d let them see my boner from time to time… hoping that I could join in the fun 😉

Soon, Mike took off his speedo and showed a beautiful hard big cock that only made me harder and want to join them even more…

Again, we exchanged looks and smiles but no one made a move. They eventually left the water to dry off under the sun. I followed and moved my things right in front of them, laid on my stomach and looked directly at them. I was determined to get their attention and join them.

Not long after I did that, they both noticed my intentions and signaled me to join in. Jackpot.

After the light introductions these types of encounters normally have, I sat at Mike’s left side leaving him in the middle. The three of us facing towards the sunset. More people were gathering around to see it too…

Little did we start talking when we were already touching each other’s bodies, exploring each other… we are all hard and can’t hide it, but we can’t start yet… there’s still people around, there are restaurants and bars a couple of hundred meters away, there’s still light and… well… we are in the middle of the beach. But that didn’t seem to matter at all.

We started kissing, the three of us, don’t know who started it, but it was amazing. Three tongues playing around, three strangers extremely turned on by each other.

It was one of those times when everyone fits right into place: beautiful Diego with a fantastic ass, a bottom, sexy Mike, a top, and me… well I’m very much versatile.

We started off kissing, touching each other’s cocks and asses… it’s a warm night, we are all sweaty. Diego lets us know quite quickly that he’s a bottom and Mike and I didn’t wait for a second… we rimmed his ass and kissed simultaneously for a long time . This was absolutely fantastic. We were engaged in foreplay for an hour and a half, I think. We kissed, licked, touched, sucked, fingered, and rimmed our bodies until we were ready for more. I fucked Diego on his 4 first, his ass was already stretched and wet, so I just slid in and started going. I have a dominant, playful style which I knew Diego enjoyed while Mike kissed, rimmed, and finger fucked me…  That lasted for a while and I couldn’t get enough. I didn’t want to finish yet so before cuming I pulled out to let Mike have a go. We switched, and he fucked Diego while I made him suck me. Mike was far more aggressive than me and Diego took him like a champ. After a while he asked for a well-deserved break, so we slowed down to kiss and touch each other gently… almost romantically…

I also performed a golden shower on Mike and Diego after that. It got quite kinky and I enjoyed every single bit of it.

After doing that, we went into the ocean to rinse off and came back to our spot. It was getting late and we knew that soon we would have to leave the beach. We started kissing and touching again… but I remember it being much more intense this time. We knew this was the final one. We left foreplay aside and started fucking right away. Diego was still quite stretched so a couple of kisses and licks to his hole were enough to get him ready. I went in first again. I took Diego on his back with his feet on my chest, pounding hard, making him moan, almost pulling out to just leave the tip and play with it, licking his feet and toes (strong foot fetish here), gently biting his legs, pinching his nipples, making him ask for more, then throbbing in and out… gaping. Meanwhile my ass was being finger-fucked by Mike and he was playing with my prostate… 3 fingers knuckle deep… it was delicious, and I couldn’t take it for long. I came hard and deep in the boy’s ass with his foot in my mouth… finally Diego sat on Mike’s cock and rode him. I sat on Mike’s face and kissed Diego. They both came is that position.

We hugged and kissed for a while before going into the ocean together one last time to get clean. We continued to kiss and be playful with each other in the water…

At last, we came out, dried off with our towels and took our separate paths.

I left the next morning at 7am.

There’s only this pic Diego took with my phone, before the sun went down.