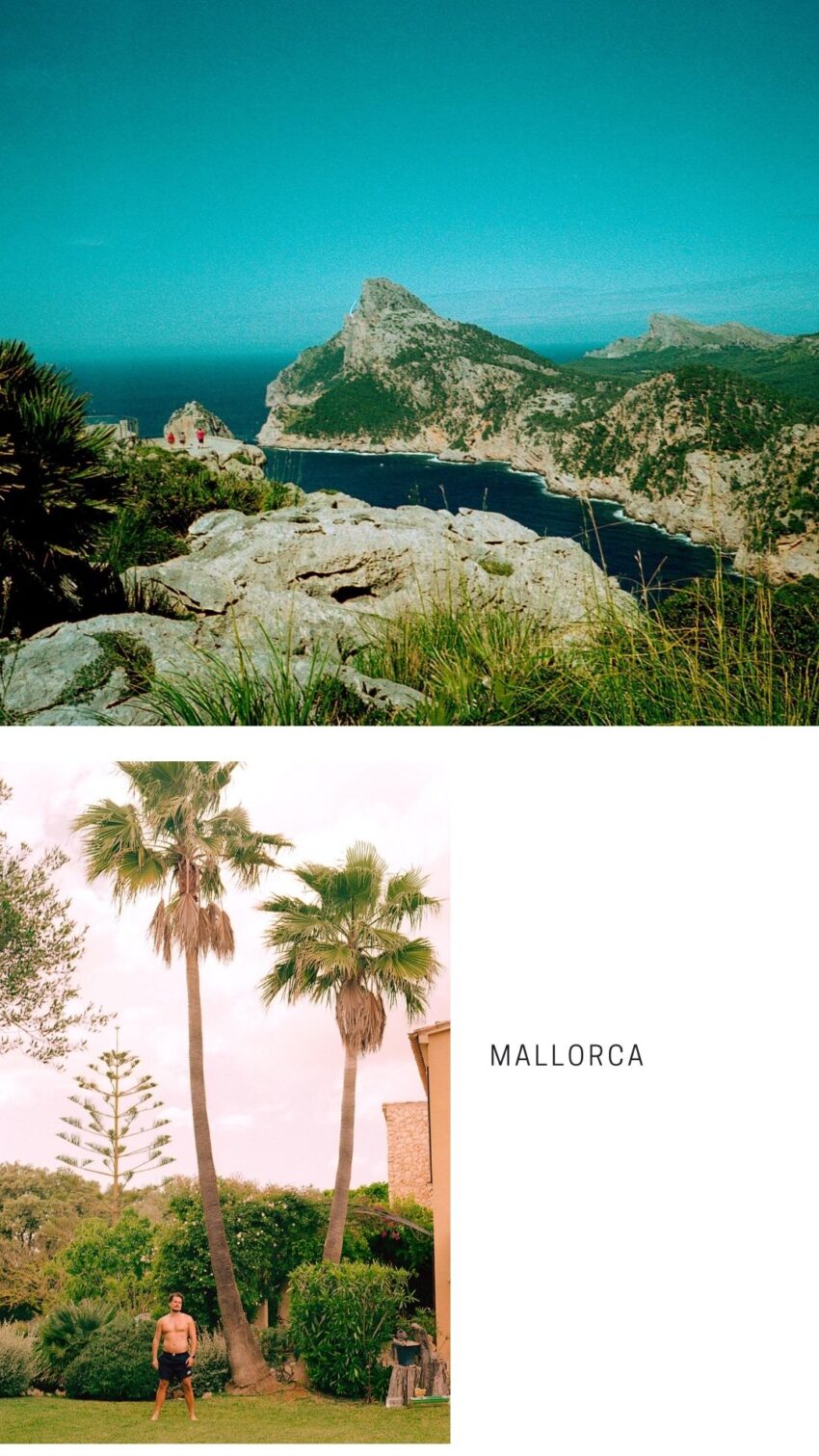 A friend told me: “Think, what you can influence within your abilities, in order to change the current state of your life.” I was suffering from being stuck in Belgium for all this time, suffering from binding to the rules while being paranoid seeing others stump upon the rules mindlessly without any guilt. I was suffocated, trying to find a balance between all these good and bad. My friend asked me what I wanted to do. I said I wanted to travel again. He said, then do it! So, I took the chance when I could and booked a trip to Mallorca to spend the long weekend, with my cameras and films. I was a bit hesitant in the beginning, but then I asked myself, “what am I waiting for?” This was something I could do, within my sphere of influence to make a positive outcome. Maybe it had been too long since I traveled last time, summer 2020. The idea of it seemed a bit odd. Nevertheless, I quickly dove into planning this trip, booking flights, hotels, and rental car, contacting people on instagram for photoshoots, preparing luggage and gears.

The day of the travel came. I felt rejuvenated. There’s no little bit of hesitation or regret. “Mallorca I am coming!” I’ve heard stories of others about this popular island. Depending on the person, everyone has some kind of special memories about this island, the emerald green or sapphire blue colors of the water, some hot adventures on the nude beaches, the wild mountains or the wild nightlife. I visited Mallorca long time ago. I can’t remember exactly how many years ago, but I was at that time still a regular traveler, hopping from one sightseeing spot to another. Maybe because the time was short, I didn’t really explore the off beaten paths on the island. I just remembered the fishing village near Soller, where we had delicious fish at a local restaurant next to the seaside, and the streets in the old town of Palma where I bought my favorite sweater in a local shop which sold locally designed and made clothes.

I wanted to photograph some boys on the island. Given the fact that many European countries were still advising against travels abroad, only a fraction of tourists visited the island. I managed to fix 5 photoshoots, with 1 extra to be fixed at the last minute. I was fine with it because then I had one day for myself to relax and do some sightseeing. In the end, I did 8 photoshoots, fully taking advantage of the sunny weather and the environment that the island had to offer. Sure, I was exhausted, it’s a 9 to 21 kind of schedule for 4 days, but I was super happy at the same time, being able to meet people, conversing with them, even walking into nature or the beach with some of them. Another fascinating thing is that 5 out of the 8 boys are not even Spanish. Isn’t it amazing how we managed to meet each other, crossed our paths and shared a bit of our life stories on this island?

Jorge, the first boy I shot, came to my hotel on the first day when I arrived. I was half an hour late because of a mistake with the rental car. Before we met, he told me that he had a Parkinson surgery. I couldn’t believe how it must have been for him before and after the surgery. So I kept the information for myself and didn’t really talk about it. I think he will tell us if he wants to when writing his story down. Then the next morning I met Lucas, an Argentinian who moved to the island a few years ago with this husband. This reminded me of my friends, Manu and Diego in Barcelona, another Argentinian couple in Spain who I should visit again soon. We went to the woods at the foot of the castle bellver then later the beach in IIIetas. He’s kind of shy, he admitted. Then there are two Sebastian’s, both from Germany. One left Germany after a breakup and found his place in a b&b in the countryside. One moved here many years ago and now practices Wing-Chun. One skinny-dipped in the pool in the dark night and one simply lay in his bed, connecting with his own body and feelings.

Xisco was busy with work, preparing a wedding on Ibiza. Our shoot almost fell in the water but we managed to meet and spent two hours in the woods near the playa de muro. We crossed the fence and found a few spots to shoot. He told me how small the island was and how the gays knew each other, then lamented that he’s horny all the time but didn’t have time to have sex. Hehe, take it easy, baby. Sometimes we need to play a little to carry on living. Roberto is an Italian porcelain master. I think he’s the only one that contacted me on Instagram first, asking if I wanted to shoot him. I said why not. He said he’s an old man. I really didn’t care. It’s good to have a bit diversity in the project. I arrived at his apartment in the old town in Palma. His dog, Baba, welcomed me enthusiastically and stayed with us all the time. You will surely see some photos of Baba and Roberto together.

Then, there’s Teo, a local boy who contacted me on Grindr. Yeah, I use Grindr when traveling, in hope of arranging last minute photoshoots. It’s not really a good way and I don’t really like to use Grindr, but sometimes it’s the only tool that I’ve got. Teo came to my hotel after exchanging some messages. I had the impression that he’s not very relaxed as if he’s holding back all the time. We only managed to take a few photos in the limited space of the hotel room. Later he sent me a message saying he’d gained weight due to Corona. Well, I noticed the difference from the photos he sent me earlier but didn’t think it’s a big problem. After I scanned the photos, I quite liked some of them. I sent the photos to him. He said bluntly that he didn’t like them because he looked fat. It’s a pity, to be honest. I told him that I couldn’t change his view on himself or convince him to love himself. It’s something for himself to resolve. I told him, I found the attitude of self-confidence is way more attractive than a fit body.

Here we go, the last boy, Francesco. I would call him the special one on this trip. On my third day, I started spending my day visiting the famous village Valldemossa, driving along the winding roads from there to Port De Soller. The views along the roads were breathtaking. Cliffs, deep blue ocean, pointy peaks, old villages tugged in the mountains lifted my spirit. It’s the only day I didn’t plan any photoshoot so that I could rest a little after two days’ intense (nevertheless amazing) work. I just returned to Palma and visited a local photography shop near La Ramblas. Then I saw Francesco on Grindr. I knew I wanted to photograph him right away. Even though Grindr is not the primary source of scouting for potential models, I sent him a message asking if he would like to pose for me. To my surprise, he said yes. I felt like I hit the jackpot.

There’s something about him, his face and his body, and there’s more. Sensuality, definitely, sexiness, check…the only worry is that I don’t know anything about his character. I am not good at being with people with egos, especially those boys who rely on their youth and use the excuse of it to be ignorant and arrogant. Luckily he’s neither of these things. He’s poised, soft-spoken, engaging but doesn’t make everything about him. We finally decided to go to the beach to catch the last rays of sunshine before it disappears behind the mountains. Punta Negra, it’s called. The island is still recovering from Covid. Tourists are coming back but not many at this moment. Francesco got naked and put himself on the rocks, while some young fools partying on a boat nearby cheered, whistled, as if it’s Christmas, they just saw the best gift ever in front of them.

I love the contrast of his pale slim body and hard cold rocks. It makes him appear more vulnerable. The sun sets. Before it hides behind the mountains, it turns the opposite bank into golden. We wanted to chase after that color, therefore, moved to another beach, the so-called official nude beach on the island, playa del mago where we followed a small path leading to an open area with caves. We’re all amazed by the magnificent views in front of us, the colours, the caves…a perfect location for photos. The only pity is that the sun has gone. It’s getting dark. I am not gonna be able to capture that vibrant yellow and the texture. But hey, it’s life. A sign for return?

I have to say that this trip is very special, the combination of the environment and the encounters made it magical. Mallorca is now very different to me than it was before. After I got back to Brussels, I spent days scanning the film negatives. I loved most of the results. There’re also photos that were underexposed, making me wishing I could do it all over again. I think it’s great. It gives me the desire to return to Mallorca again. I posted a few collages on Instagram. It’s nice to see people loving them. A few days later, I received a message from the friend of Francesco. He was traveling with Francesco and actually was with us during the photoshoot. He said something about Francesco’s view on himself and how the photoshoot might have a positive impact on it. I felt very grateful to be able to do it through the project. This is what matters.