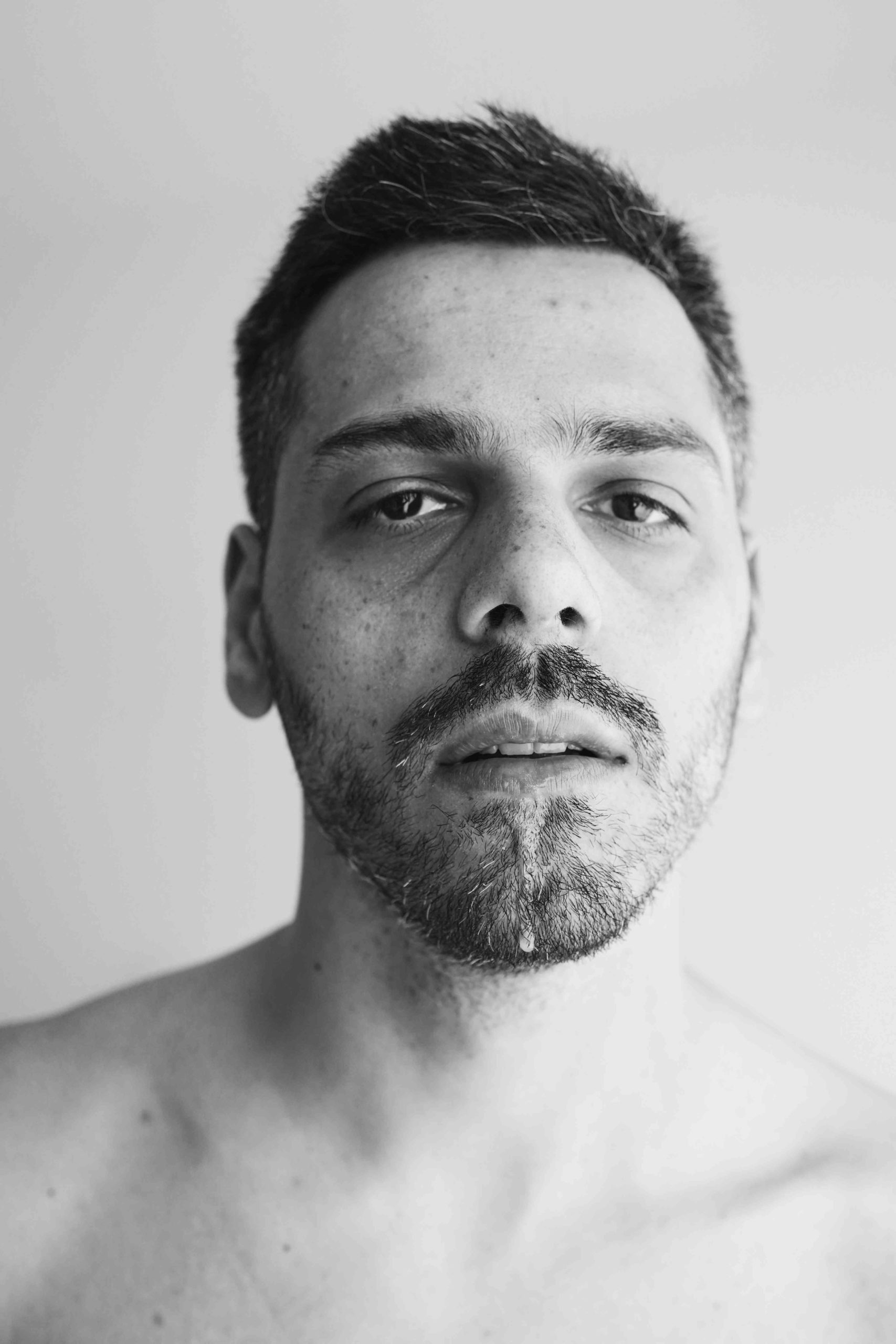 I have to admit that I thought it would have been easier to tell something about myself for this project, I usually do not have any problem opening up to tell my story but the pictures you see here troubled me in a fruitful way. I will not talk about my struggle before my coming out, because after reading the excruciating story of pain of a transgender woman in the Chassidic community, I look at mine as a breeze.

The pictures here require something else. I will start talking about the genesis of my desire for men and how at the beginning I intellectualized it to tame it. One of my first memories related to this is a picture of Robert Mapplethorpe which showed explicitly a penis. I distinctly remember the chaos that that picture created in me, I stared at it for hours, I kept thinking about it for days, I knew every centimetre of it.

It was something going beyond the impulsion of a teenager with crazy hormones flowing into his body. I was able to talk about such a strong image without the fear of being insulted, it was art. Art created not only the path to accept this desire but instilled new desires which I never knew I kept hidden inside me. That image was astonishingly powerful, I still hear the echo of it sometimes. What more can you ask to an artist?

Desire is not something given or static, it is mutable, it is a process, it is a continuous elaboration and construction you make, first with yourself but then unavoidably with the others. Desire is relational, its physiognomy changes through time and through the bodies. My desire changes as much as the water of a river. The first time I found  it in the unshaven cheek and the smell of the first boy I ever kissed, a religious procession was going on and we fled our friends to fulfill this unspoken desire, we hid from everyone, after a long time we found each other’s mouths and sealed them.

I remember the dazzling sensation and the feeling of a sort of dispossession, it was like some astral projection, I was somewhere else looking at me kissing that boy. Fireworks were exploding in the sky and my body was exploding and collapsing at the same time in that gloomy place. I still reconnect the smell of gunpowder to that moment, the moment when my desire took over, overwhelmed me.

I can’t help but thinking of the same ecstatic moment I desired to happen to me as well, and it did, being transfixed by a sweaty, musky man, subdued by the pleasure, without eyes to see, without ears to hear, without tongue to taste, without hands to touch and feeling them all at once. My body was not mine anymore it was dissolving itself and reshaping in new forms. Same as in the Bernini’s sculpture, a bunch of people was watching and commenting this miraculous moment, astounded by the sensual power that the scene emanated. Witnessing our bodies flooding, not only one into the other’s but in the room and resonating in their own’s.

Desiring or loving someone is not seizing him; desire as a total conclusion needs to pass through a symbolic death, I die in the Other but then I go back to myself, when this happen I reconciliate with myself, I am not violently seizing the Other but I am rather giving myself to him. The concept of giving myself to the Other is fundamental to express and live my desire, I completely surrender to the Other because after I don’t want to be the same as before, I am not looking for a confirmation of myself.

Lose my subjectivity to get a new one, better or worse, in the relationship with the other I do not want to recognize myself but discern a new person. This act of dying into the Other reminds me when I died into somebody’s arms, he was holding me like the Virgin Mary is holding Christ in the Pietà of Michelangelo. In that moment I was dying of pleasure. Also, in that case I was watching myself held by this bearded Virgin Mary, I was in Rome in Saint Peter watching me dying of pleasure at the altar of my own desire.

I cannot help but wonder, once again, is it art who imitates life or the other way around, but even more, can sex be a work of art?